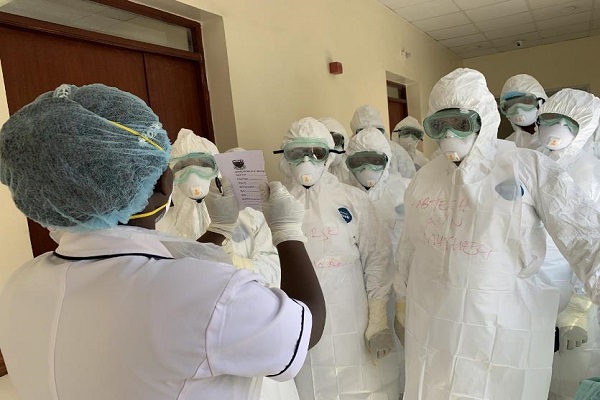 Resident doctors under the aegies of National Association of Resident Doctors (NARD) have suspended their indefinite strike action, which started on June 15.

They acknowledged provision of personal protective equipment (PPEs) in some hospitals but said there were still needs for sustained supplies.

The doctors also announced the Medical Residency Training funding has been included in the revised 2020 budget through the intervention of Speaker Femi Gbajabiamila and will be implemented as soon as the budget is assented to by the President.

They however gave the Federal Government four weeks to make good its promises.

NARD President Dr. Aliyu Sokomba made these known in Abuja at a briefing after its extraordinary virtual National Executive Council (NEC) meeting.

He said: “The NEC acknowledges the provision of Personal Protective Equipment (PPEs) to some hospitals. However these PPEs are consumables and non-reusable, therefore the need for sustained supply.

“The Medical residency training funding has been included in the revised  2020 budget through the intervention of the Hon. Speaker, House of  Representative and will be implemented as soon as the budget is assented to  by the President. At the same time, we await the fulfillment of the promise made by the Nigeria Governors Forum to ensure same is done in all the states.

“On the Salary shortfall for 2014-2016, The Secretary to the Government of the Federation (SGF) has promised to intervene. Government has shown commitment to procure group life insurance for health workers.

“The disengaged resident doctors at Jos University Teaching Hospital have been reinstated, the Chief Medical Director has been directed to pay their withheld salaries and comply with the provisions of the Medical Residency Training Act (MRTA).”

He further added: “On State Tertiary Health Institutions (STHIs), the Chairman Nigeria Governors Forum His Excellency Dr Kayode Fayemi and the DG NGF Mr. Asishana  Okauru, appealed to be given time to discuss with other state Governors of KOGI, GOMBE, LAGOS, OYO, OSUN, OGUN, ONDO, LAGOS, KADUNA, NASSARAWA, ENUGU, ANAMBRA, ABIA and IMO, for immediate pay parity as with the corrected CONMESS of 2019 and that salary shortfalls due our members will be paid shortly.

“NARD also met His Excellency Engr Seyi Makinde, the Executive Governor of Oyo state who also gave his words to favourably look into all challenges of our members in LAUTECH Teaching Hospital Ogbomoso with a view to abiding by the international standard

“NEC observed that COVID-19 inducement allowance has only been paid to eleven (11) Federal health institutions and most state governments are yet to review the hazard allowance of health workers.”

He said the NEC resolved to suspend the ongoing indefinite strike action with effect from Monday by 8am prompt.

Nicolas Anelka names best managers he ever worked with